Best Golf Courses in the Algarve

With about 40 golf courses it is fair to say that the Algarve is somewhat of an unexpected golf mecca. With sunshine almost all year long, it is not hard to see why this region is one of Europe’s premier holiday destinations, drawing hundreds of thousands of golfers to its fairways. Combining well-designed and challenging golf courses with the scenes of the coastline of southern Portugal, what you’ll get is a new and memorable experience. The golf courses in the Algarve are certainly top-class.

With that in mind, let’s take a look at some of the best golf courses in the region.

The Monte Rei resort is set in the picturesque foothills of the Eastern Algarve, with sweeping views of the Serra do Caldeirão mountains to the north and the Atlantic Ocean to the south. This par 72 Championship golf course measuring 6567 metres from the Tournament tees is a truly unique design; with water coming into play on eleven of the eighteen holes, the golf course features an enjoyable series of eight par-4s, five par-3s and five par-5s in a challenging and distinctive layout. The golf course’s presentation is highly individual, each hole a design gem blending effortlessly into this natural canvas, from its ingeniously shaped and sculptured bunkers, to the impressive presentation and attention to detail making every hole as remarkable as the next; fairways and greens are bordered by several lakes, indigenous plants, native grasses and trees adding drama to the landscape, and providing golfers with unforgettable moments to cherish in this unique and tranquil golf environment. 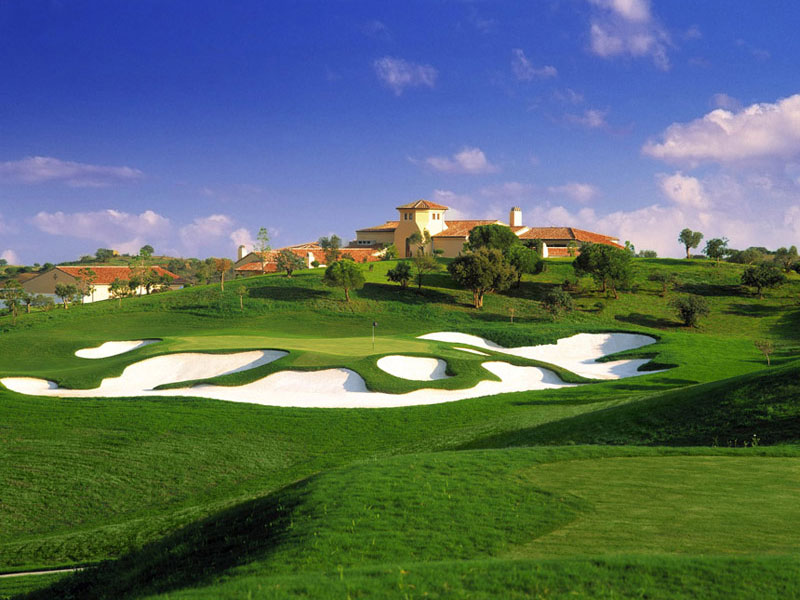 As one of the most comprehensive golfing estates in the world, Quinta do Lago is the destination of choice for millions of players who travel from all five continents in search of the ultimate golf experience. Situated in the Quinta do Lago development and forming part of the Ria Formosa Natural Park, San Lorenzo Golf Course lingers long in the memory of all who play it – a combination of natural beauty, pristine presentation and hole after hole of challenging golf. The course was designed by the American golf architect Joseph Lee and the beautiful Bermuda grass fairways provide perfect playing conditions. It is laid out in a figure of eight and at the heart lies the San Lorenzo Clubhouse with a golf pro shop; comfortable changing facilities; welcoming bar and restaurant.
While much of the golf course meanders through typical pine woods, it also opens to magnificent ocean vistas and distant mountain backdrops. A good part of the San Lorenzo Golf Course is virtually an extension of the nature reserve of the Ria Formosa Estuary with fairways that run alongside saltwater marshes and freshwater lagoons. All 18 holes feel in complete harmony with the nature reserve, with the course and surrounding area playing home to over 70 species of bird, including herons, white storks, coots, black winged stilts and the rare purple gallinule.
Having received countless awards, the San Lorenzo Golf Course is considered one of the best golf courses, not only in Europe, but ranked worldwide.

Quinta do Lago has three championship golf courses, South Course, North Course and Laranjal. Each has been expertly designed to complement its natural surroundings and each offers its own set of unique challenges.
Wide lakes, undulating fairways and strategic bunkers characterise the terrain, along with carefully tended greens, considered some of the best in Portugal. Framed by a distinctive canopy of umbrella pines, the fairways wind their way past wild flowers, broom and heather, offering tantalizing views of the Ria Formosa National Park on one side and the Atlantic coastline on the other.
This lush, green landscape is interrupted only by the white sand of the bunkers and the deep blue of the many lakes and water features. While enhancing the beauty of the setting, they also serve as a constant reminder of the accuracy and aptitude that is required on courses of this caliber.
All three courses feature first-class practice facilities, a golf academy, practice greens and bunkers, buggies, pro-shops and clubhouses with outdoor dining terraces.
The newest of its three courses, Laranjal, was voted ‘Best Golf Course’ at the Portuguese Travel Awards in 2011 and the iconic South Course, eight-times host of the Portuguese Open, was included in Golf World Magazine’s ‘Top 100 Golf Courses in Europe’ in 2012.

One of the Algarve’s most famous golfing names, Vale de Lobo was among the first tourist resorts to be built in Portugal. It is also the first of the three corners of what is today known as Algarve’s Golden Triangle, a name for a triangle of resorts which comprise the most affluent tourist area of the Algarve. Situated 20 minutes from Faro and its international airport the venue is home to two challenging and outstanding golf courses – the Royal and the Ocean.
Abiding by the original design concepts produced by the legendary Sir Henry Cotton for Vale do Lobo in 1968, the respected American golf architect, Rocky Roquemore, undertook a total re-vamping of both layouts in 1997.
The two Vale do Lobo Golf Courses complement each other delightfully. The Royal Golf Course is a stunning and acclaimed par 72 course sitting among lakes and pine trees with beautiful views of the coast, whilst the Ocean Golf Course is a par 72 course sited almost on the beach, with unrivalled ocean views.
The 6175 metres long Vale do Lobo Royal Golf Course has championship tees, and is a lot more difficult than the Ocean Course.
This is because of its more interrupted terrain, the amount of water and sand obstacles and its generally longer holes.
The Royal Golf Course is also home to one of the most photographed holes in golf, the par-3 16th hole at Vale do Lobo rightly sits high on any top 10 holes in golf lists.
Vale do Lobo was recently voted as Portugal’s top golf resort by readers of Today’s Golfer magazine. 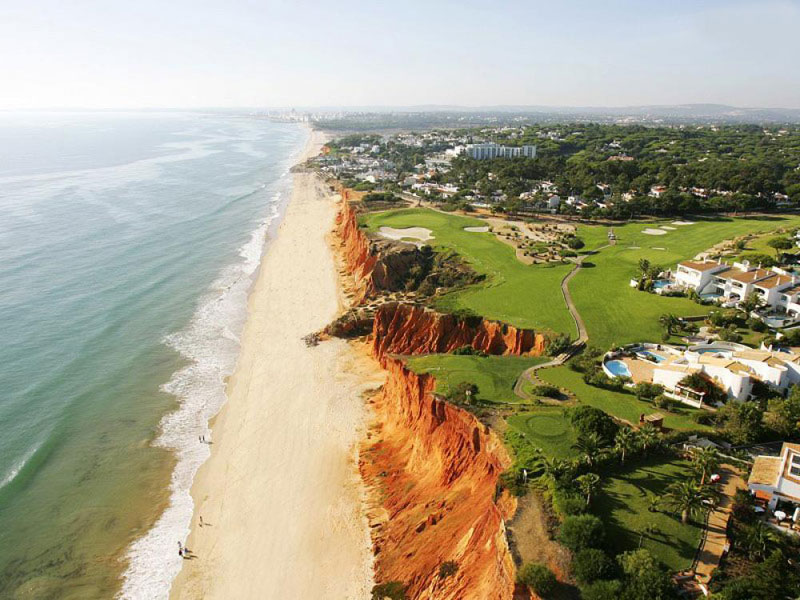 The oldest and finest golf resort in the Algarve, Penina Golf and Resort combines a great family resort atmosphere with the ultimate golfing getaway, resulting in the prime choice for a Portuguese resort holiday.
The resort spans 360 acres (1.5 km2) and contains a hotel complex, golf courses, tennis courts, a football pitch and an running track.
The resort’s 18 hole Championship Course, designed by Sir Henry Cotton and originally called The Penina, was the first resort
course to be built in Portugal and has been the venue for the Portuguese Open on many occasions, most recently in 2006. In addition to the world leading golf courses, there is also the highly regarded Penina Golf Academy, which offers the very best in tutelage and instruction from some of the most successful pros in the Algarve.
Penina Hotel & Golf Resort is located between Portimão and Lagos.

Designed by the famous American golf course architect Ronald Fream and inaugurated in 1992 Vale de Pinta has earned its place as one of the best designed courses in the Algarve and in Europe. It is set in Lagoa, in a truly Algarve landscape with almond, olive and carob trees decorating the course that rolls through small valleys and hills. Two holes that deserve special mention are the par-3 tenth and the par-5 thirteenth. The former has a large bunker defending the green against your shot, the latter, winds through a valley for 541 metres.

Located in Portugal’s Western Algarve, Alto Golf & Country Club is a premier resort set in beautifully landscaped gardens with villas, apartments and townhouses many with superb views of the sea, the golf course or the fabulous gardens.
The resort’s 18 hole, par 72 golf course, was the last to be designed by the legendary English golfer, Sir Henry Cotton. The course, which measures 6125 metres from the back tees, spans across two gently sloping valleys and has winding fairways and elevated greens. The opening nine holes overlook the bay of Lagos, while the back nine is set on rolling slopes.

The main golf season is from late autumn to late spring. Winters are mild and golfers can enjoy playing even in December and January. Be warned, however, that despite southern Portugal’s appealing sunshine statistics, rain does fall from time to time and nearly all of it during the main golfing season.

An increasing number of superb courses and great weather mean that the Algarve is set to stay a firm favourite for golfers.